All of our vehicles have had names so there was little doubt this one would too, but it had to earn its name. At some point on our first trip, one of the wimpy Dodge anti-sway bar (aka sway bar for some reason) end links broke. We had heard a loud pop but weren’t sure what it was. Driving out of Death Valley down the twisty Hwy 190 was quite an adventure. The truck was rocking back and forth the whole way. We actually passed another XPCamper on the road coming up but I could barely take one hand off the wheel to wave.

When we returned home, I started researching Dodge front ends and found out the end link had just been recalled by Dodge. Mine was recalled by Death Valley. I wanted an upgrade to the front end as the Cummins engine is notorious for wearing out front end parts. One trip to Carli in Corona solved my front end woes. I had them install anti-sway bar end links ( to replace the broken unit), new billet ball joints (lifetime warranty!), and a front differential skid plate. 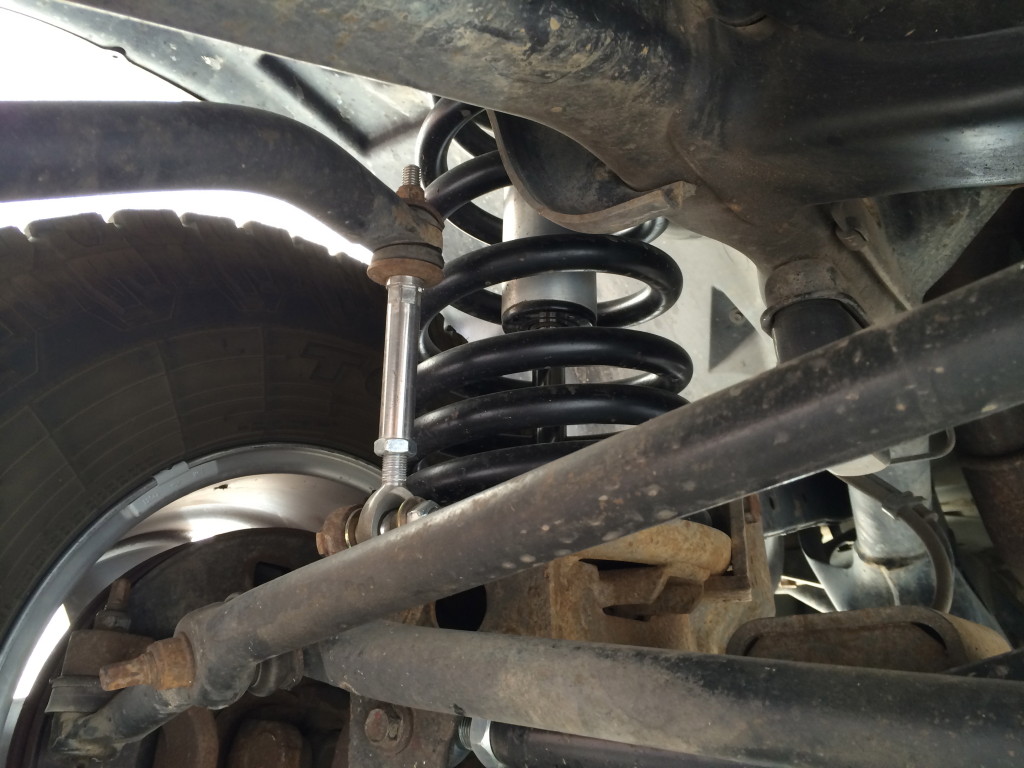 The new front end was so much better than how I dropped it off I’m not sure how I even drove it there, but I had other modifications in mind. The slide on our table was damaged when we got the rig and ultimately we tore the table off the mount in Death Valley, live and learn. When off-roading, keep the table stowed completely down for maximum durability. We could have had XPCamper craft us a new one but I have a friend who is a cabinet-maker so he and I met at a lumber yard to pick out some zebra wood for the replacement. 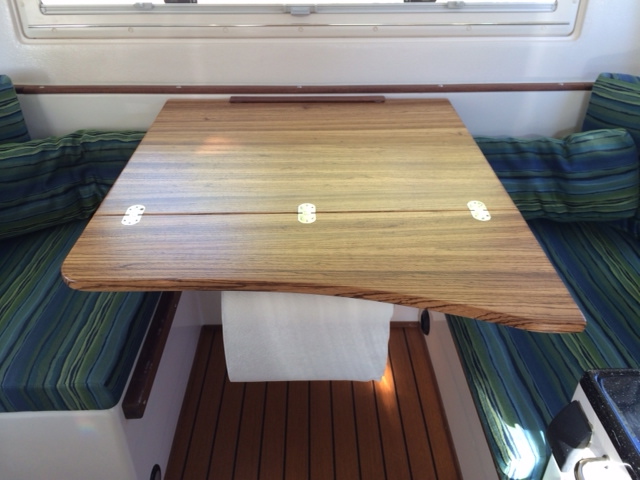 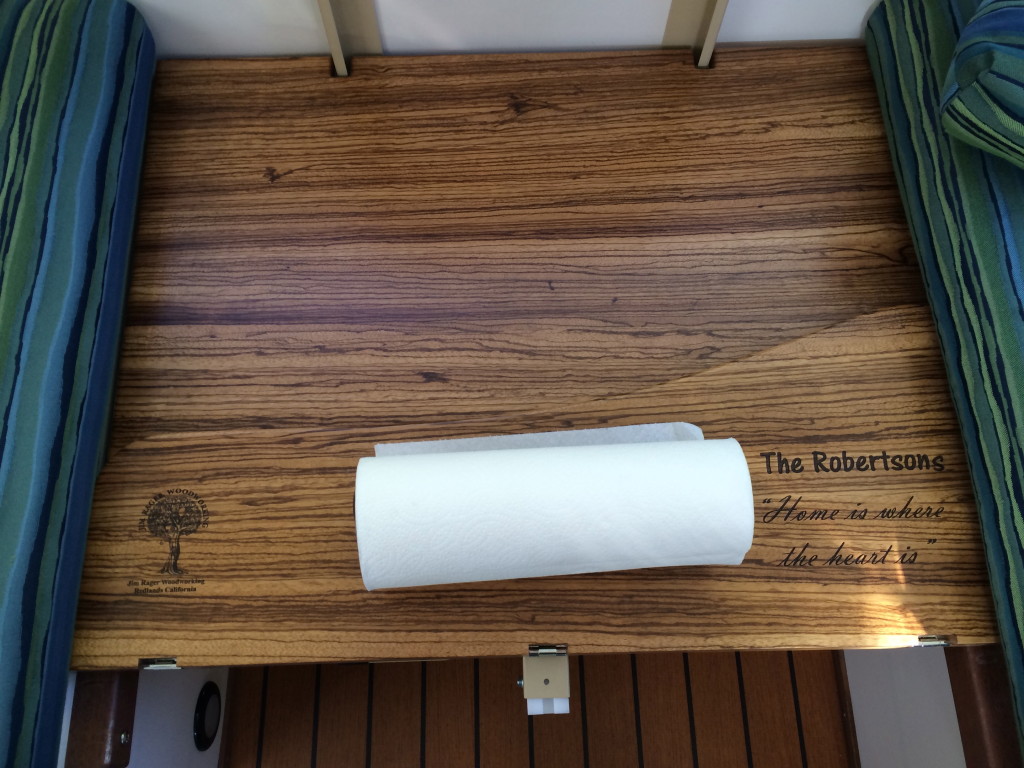 He surprised us with an engraving on the underneath side of the flip section. 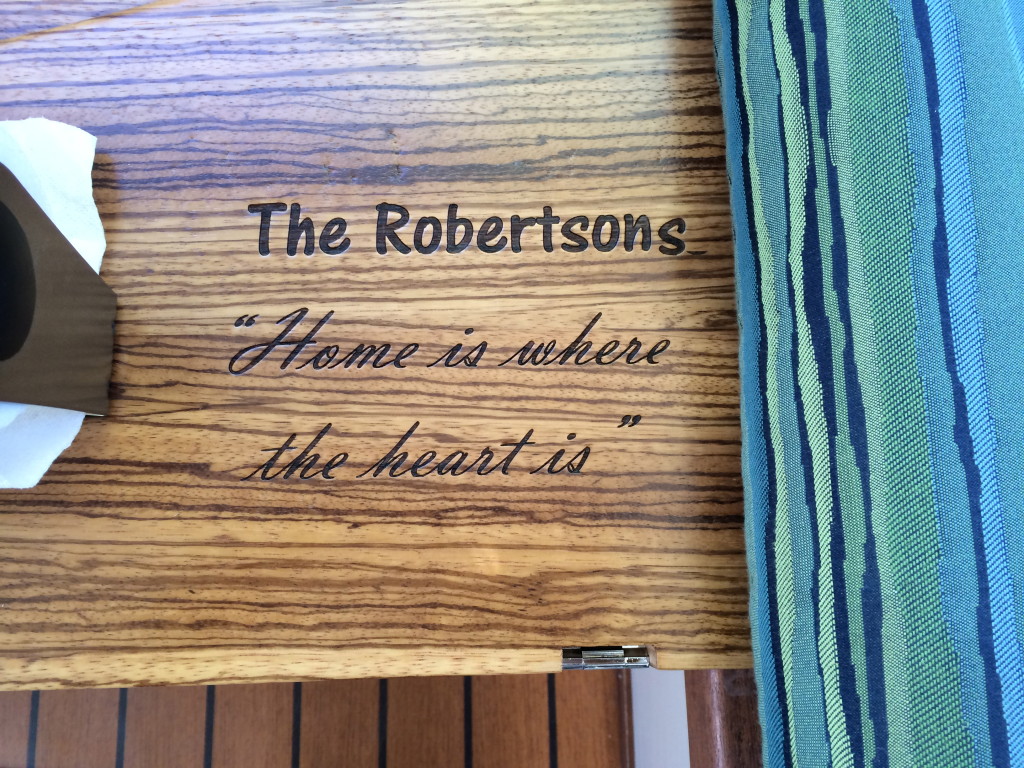 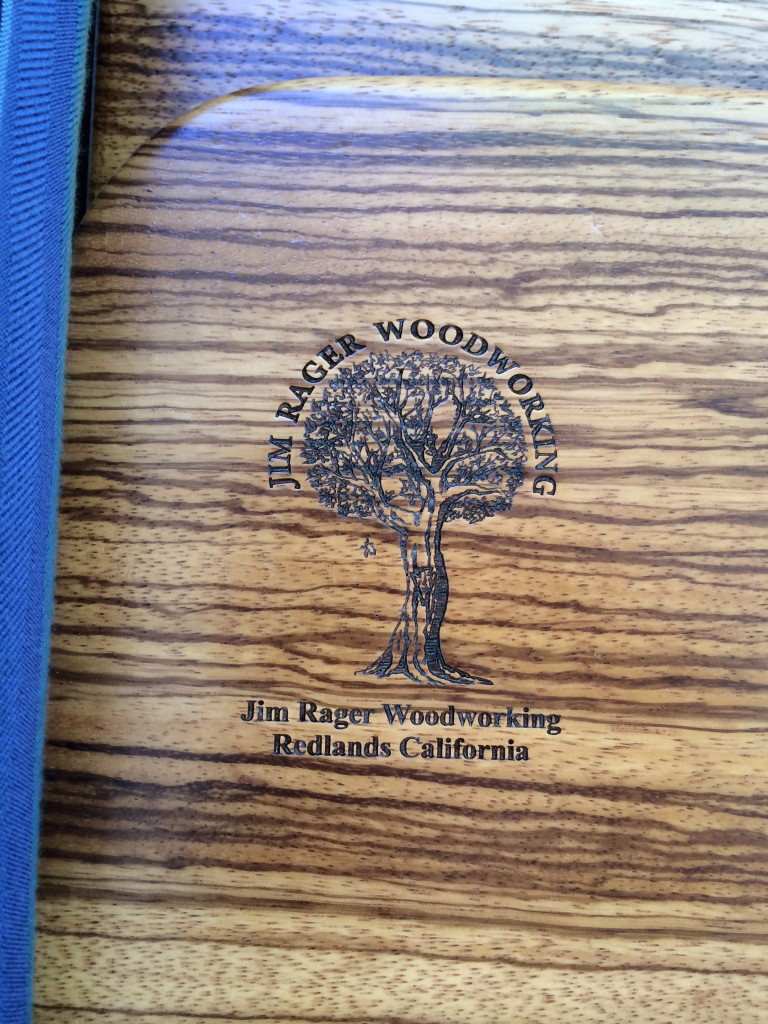 That took care of the interior of the camper but I had more modifications in mind for the truck. The truck badly needed addition ground clearance so I ordered Toyo AT2 Extreme tires, size 285x75x17. They add about two inches of additional ground clearance and give the truck a much better stance and look. I mounted them on a set of used 2014 Dodge Powerwagon wheels. I picked these up for only $400 from Craigslist. Many folks buy these new Powerwagons not realizing what great wheels they already have and feel the need to “upgrade”. These are lightweight polished aluminum and have an interior bead that acts as a bead lock to help keep the tire on the wheel when airing down. 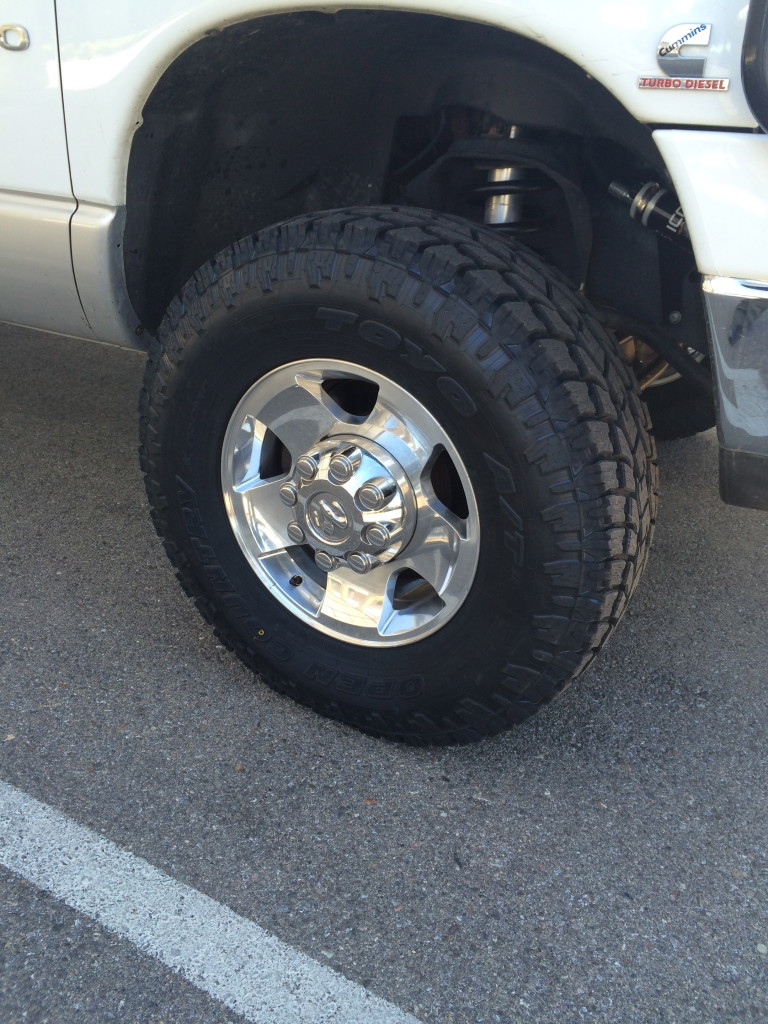 With the new tires, it was getting increasingly difficult for the ladies in my life to get in and out of the beast so I installed a set of used Dodge (Amp Research) power steps. The steps are completely invisible when closed and sit above the frame rail. They open in about a second when with the front or rear door on that side is opened and provide a nice wide, sturdy step to ingress and egress.

I swapped a couple of items from my old rig, my Lightforce off road lights and my air compressor. Both fit well on the new truck. 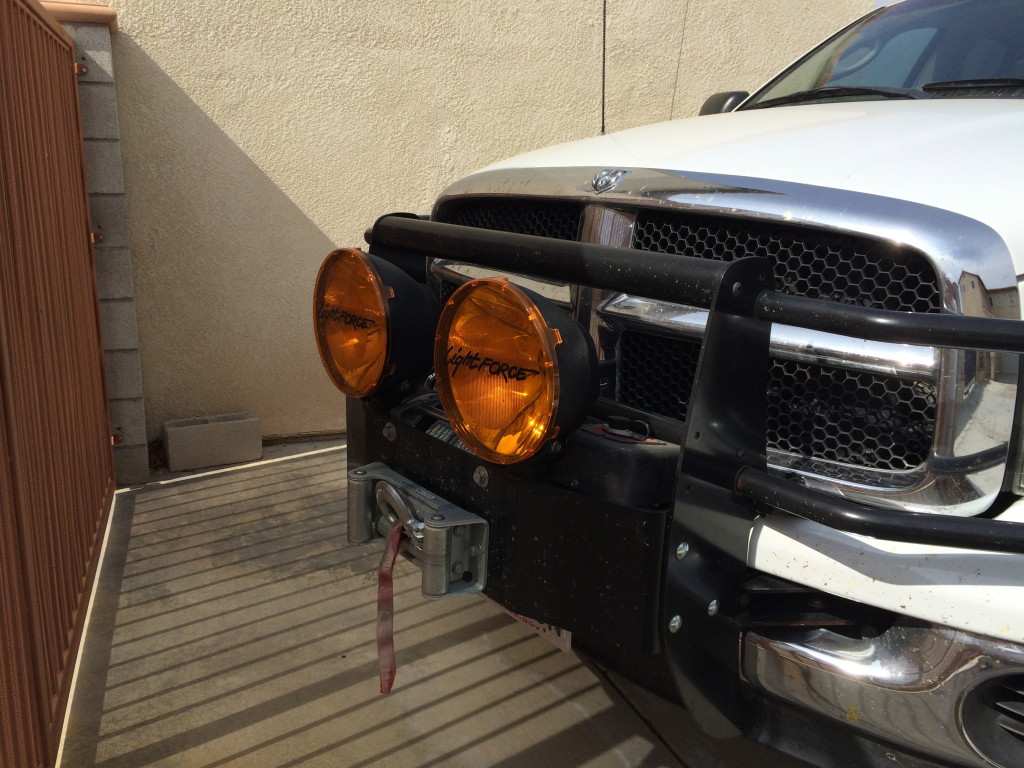 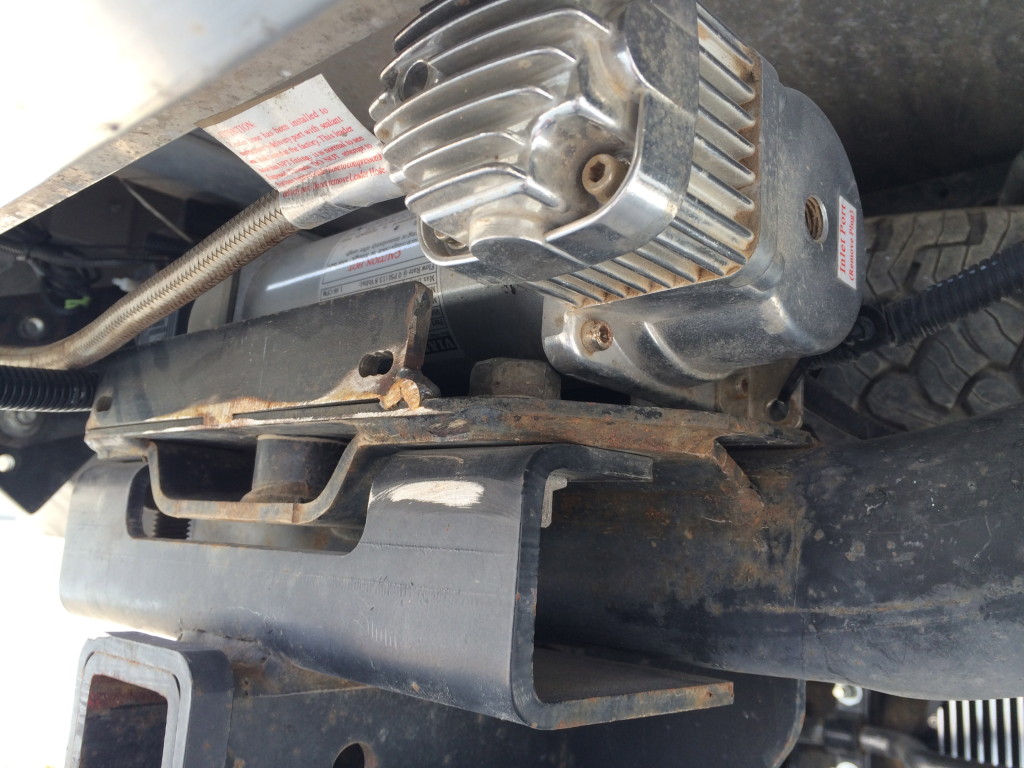 The interior of the truck got a couple of upgrades, $100 used Dodge leather seats which are much more comfortable than the cloth ones they replaced. I mounted my old CB to the center hump. I’m not sure how much I’ll use it but when we go to Alaska, its the preferred (maybe only?) form of communication on the Dalton Highway. I bought a couple of vehicle specific mounts from Proclip. They snap onto the dash perfectly and hold the GPS and my iPhone (not pictured for obvious reasons). Lastly, I had XPCamper add rear and front cameras with a small monitor mounted to the dash. 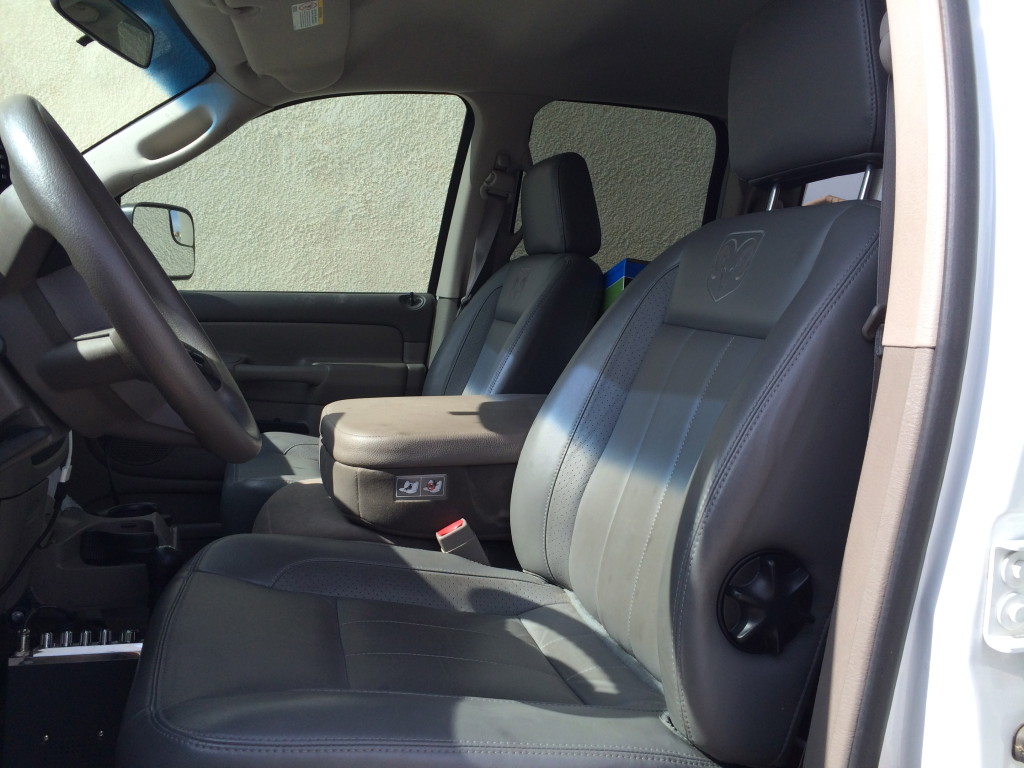 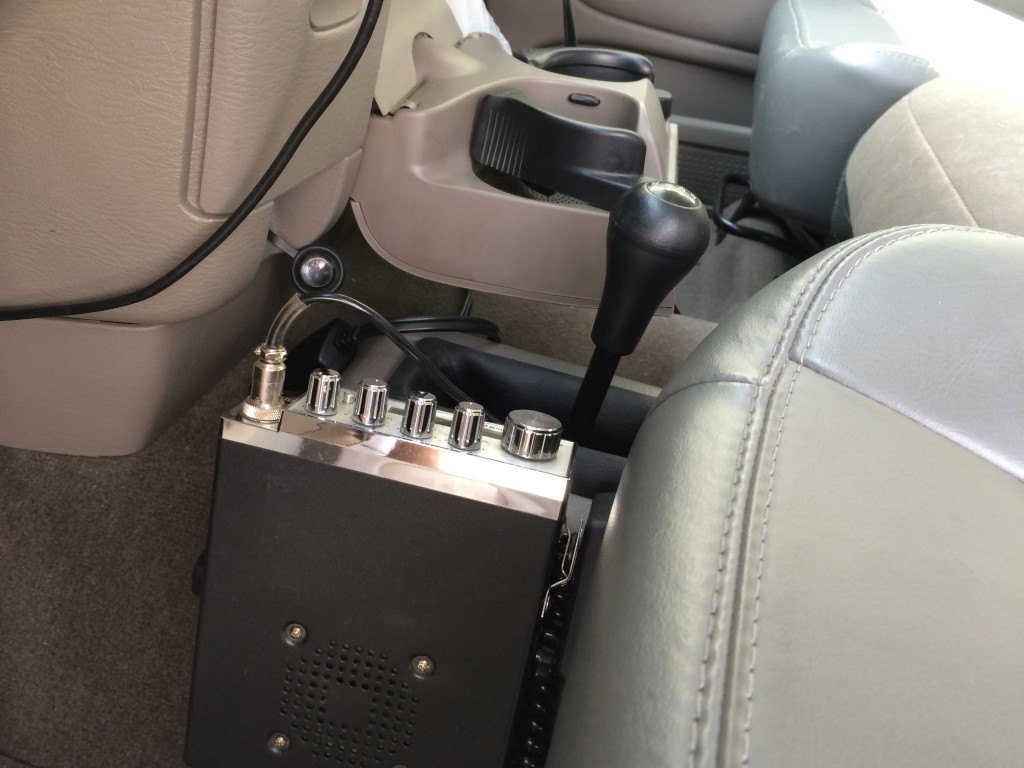 my old CB mounted to the center hump 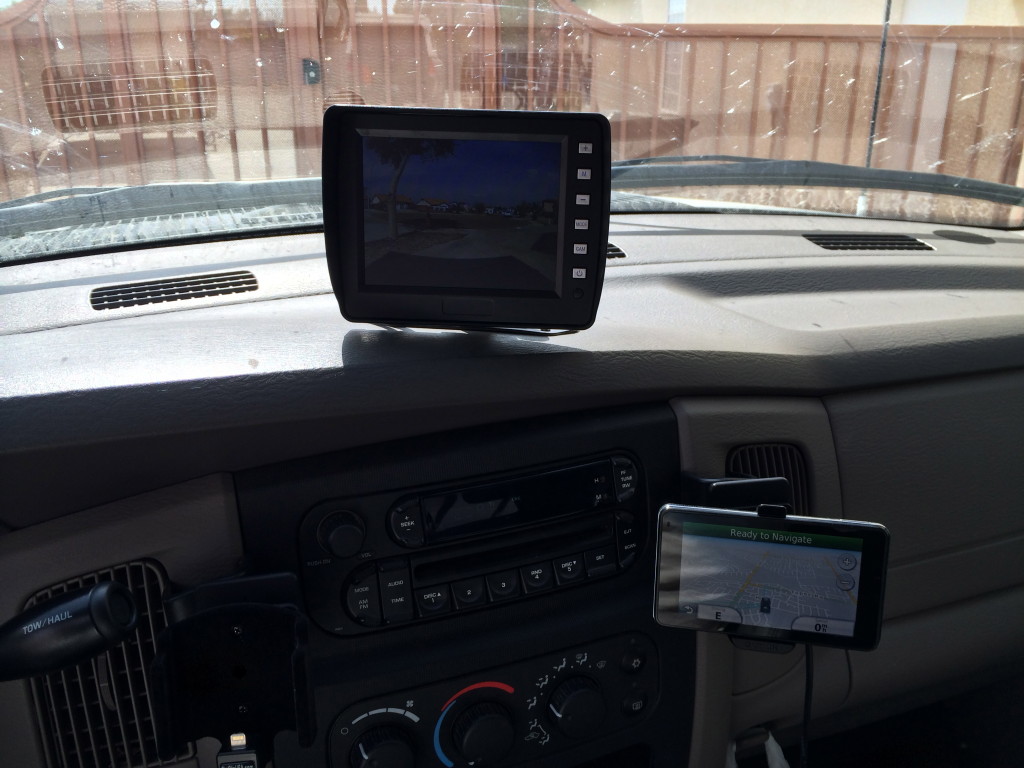 While the camper was in Grass Valley, I had XP also install a 62 gallon diesel tank. That thing goes basically from the driver’s seat all the way to the rear axle. They also installed a couple of USB chargers in the interior and exterior compartment, and Mag-Hytek differential and transmission pans with skid plate. 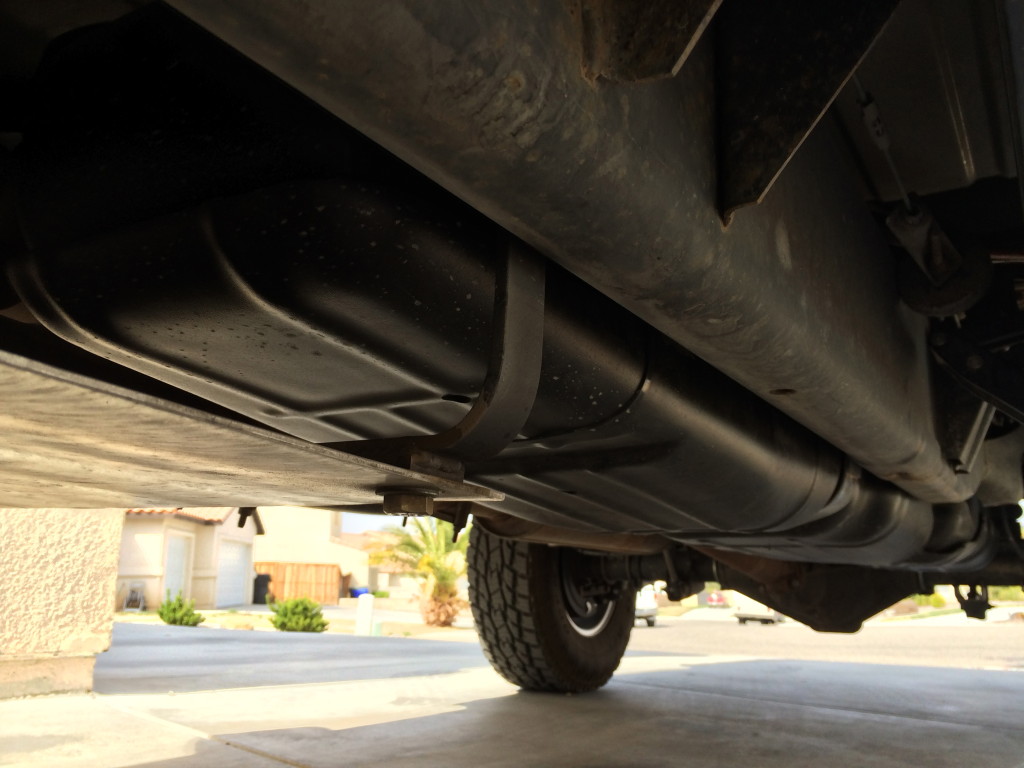 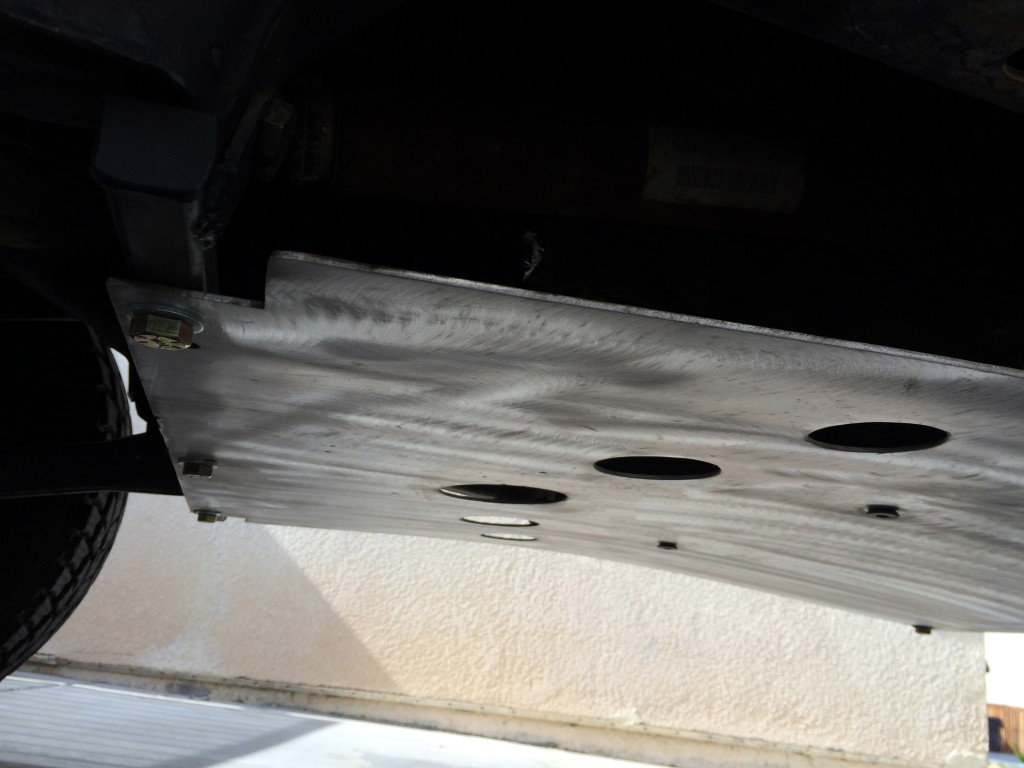 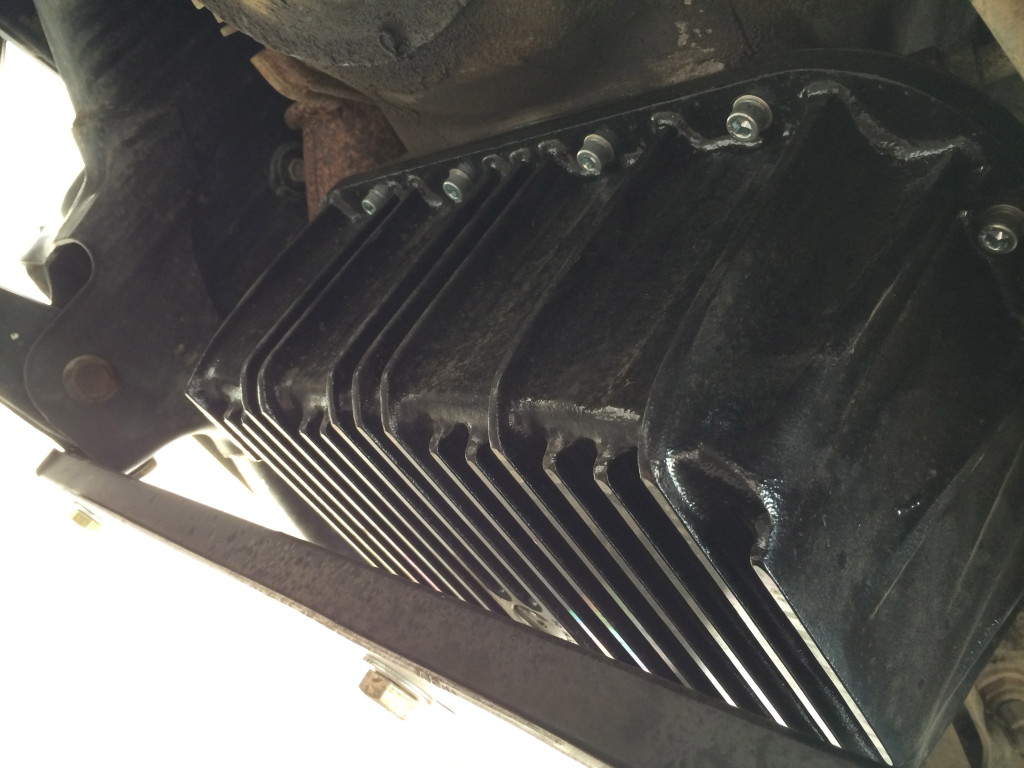 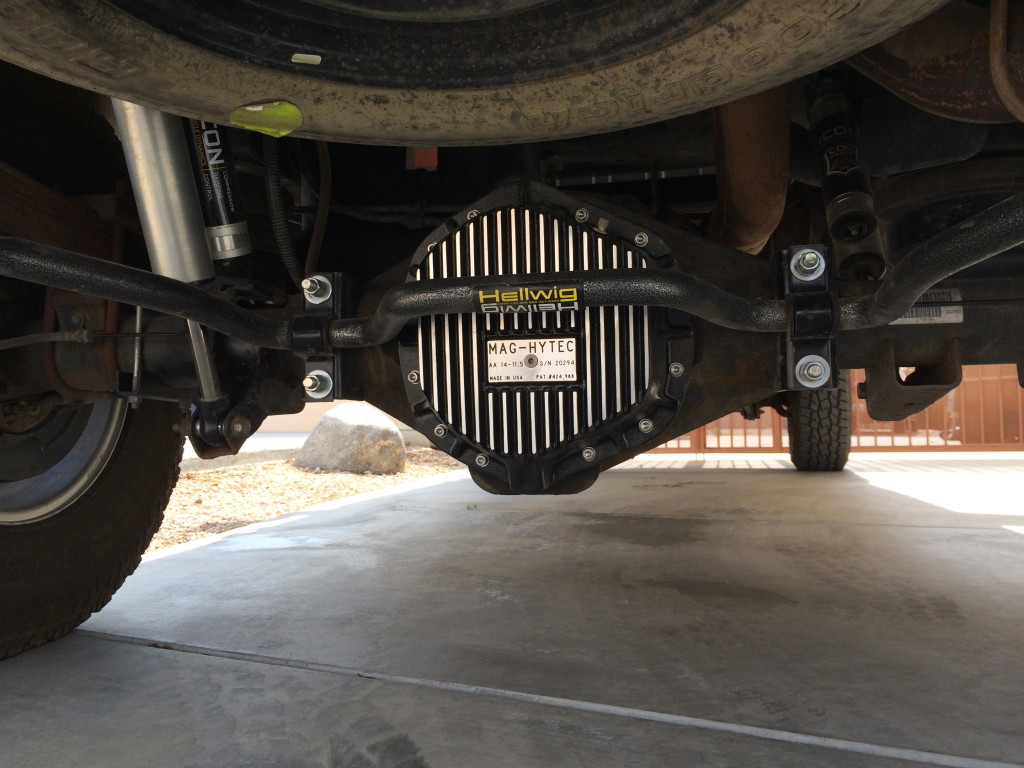 After all that was done, I still had a job to do, remove the camper for my first time and go get the bedsides from the original owner. Removing the camper was a relatively simple affair involving bolting the jacking points to each corner, mounting the jacks, and going around the camper slowly cranking it up one corner at a time. It was making some odd creaking noises but they seemed fairly normal. The only problem was the camper wasn’t lifting off the flatbed. Upon closer inspection, the rear wheels were slightly off the pavement! I learned the bolts that appear to hold the camper in place, where the jacking points go, are only there to keep the holes free of debris. There are actually four other bolts that attach the camper to the flat bed. Once I lowered the truck back down and removed those bolts, the camper easily lifted off the flatbed using the camper jacks. 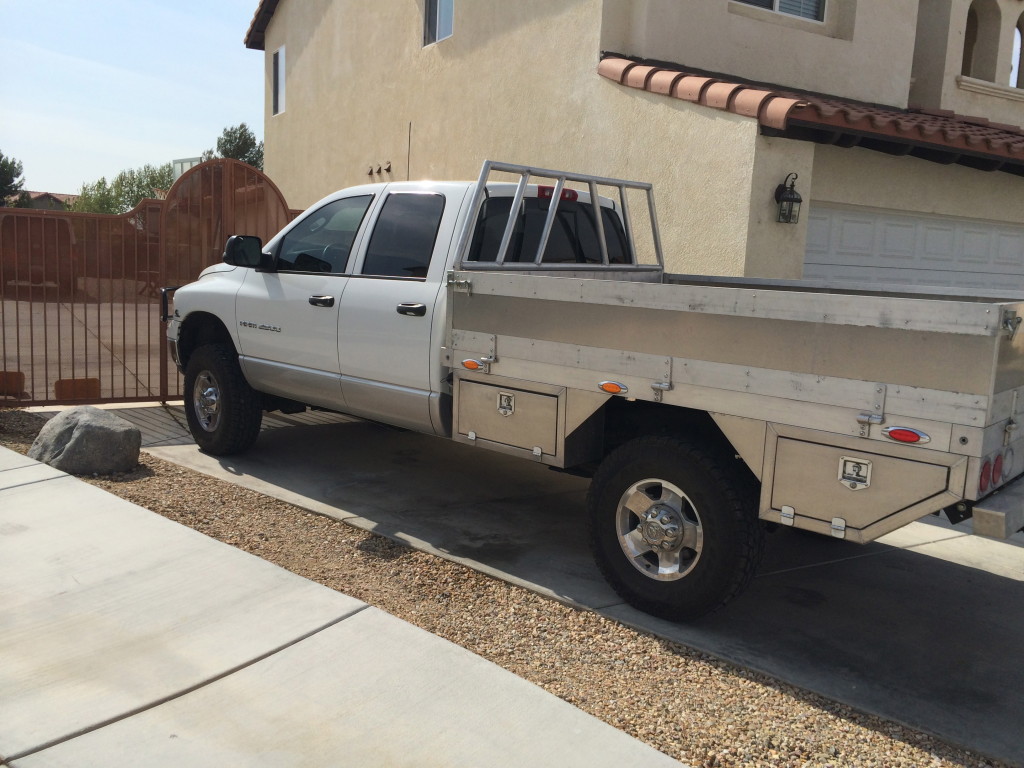 truck with bedsides while camper is stored

Between a few minor issues that were repaired by XPCamper, and many new owner errors and bit of a learning curve for us, we had never owned a truck camper nor had so many systems to learn, the new rig has earned a name after four months of ownership — the Millennium Falcon. Its got plenty of power (especially with the Smarty Jr. engine tuner I installed) and its got a lot of systems that are all easy to use but require some maintenance and occasional repair. I’m confident this rig will be with us performing dependably for the next couple of decades. 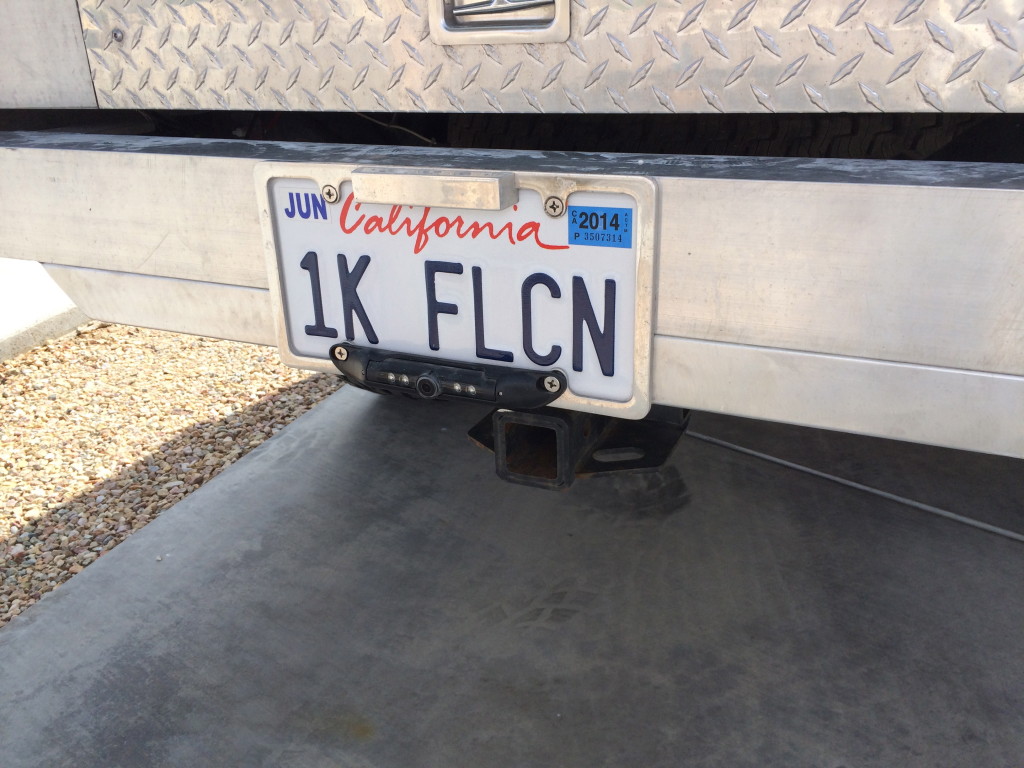