We needed to make a pilgrimage to XPMecca in Grass Valley, CA so we made a four-day weekend of it. We drove eight hours north and parked in the XPCampground, aka Marc’s parking lot. Not the most scenic “campground” but we’ve stayed in worse places. We tooled around gold country in a rental while the XPCrew did some upgrades to our rig. More on that in a separate post.

Our first stop in gold country was Sutter’s Mill at the Marshall Gold Discovery State Historical Park. In all honesty, it was bit of a letdown. Some of the buildings had some history to them but many of the displays were replicas. Considering the gold discovery had on the timing of California’s statehood, it would be nice to see more investment there compared to some other state parks we have seen and even the one we visited later. The state is working on renovations which should improve the experience but they’re using 2006 Clean Water Bond funds to do it. I couldn’t see any connection to water bonds but this is a travel blog, not a political one so let’s move on. 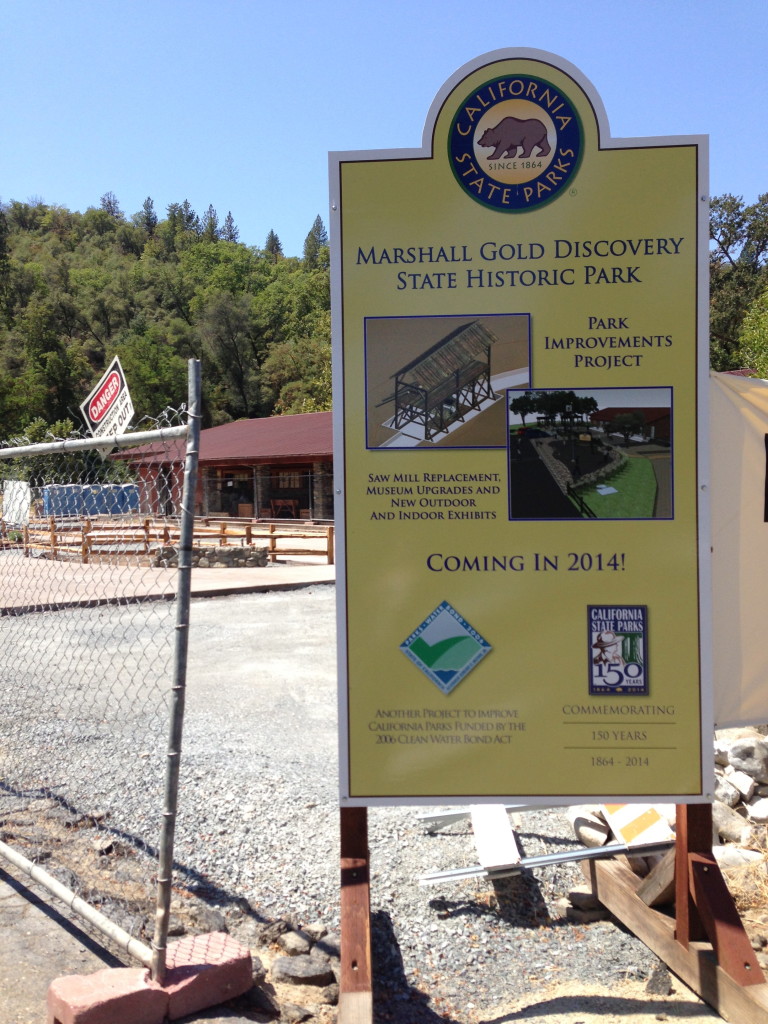 Park buildings under renovation and expansion 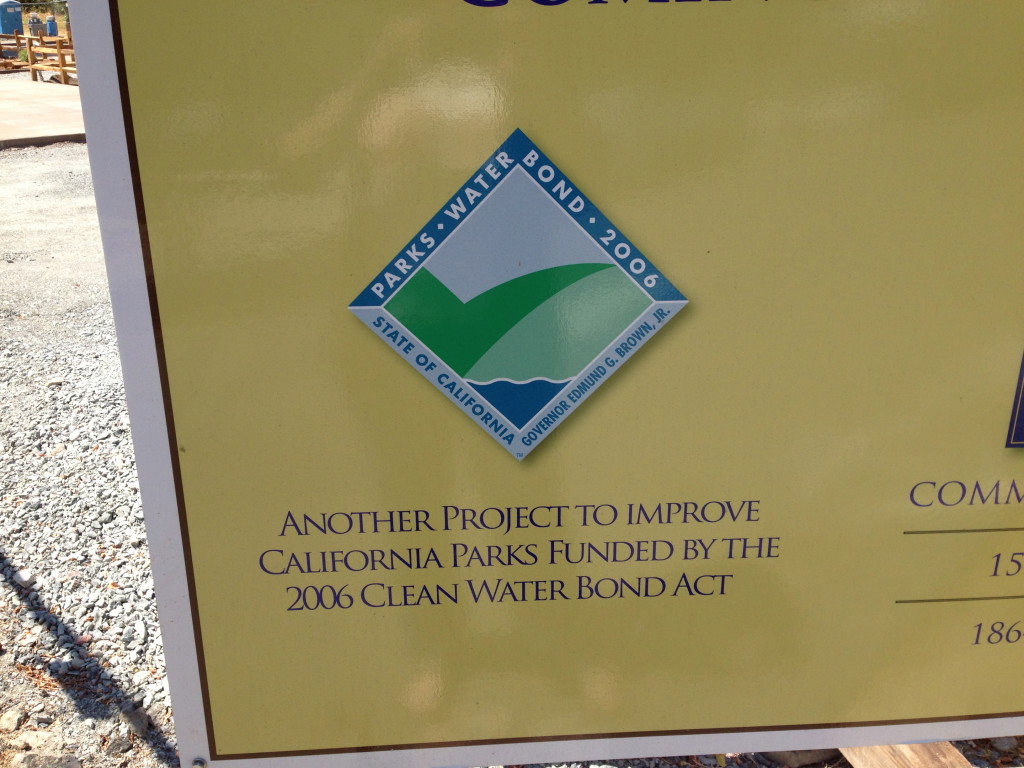 But the state is proudly using 2006 Clean Water Bond Funds to do it. 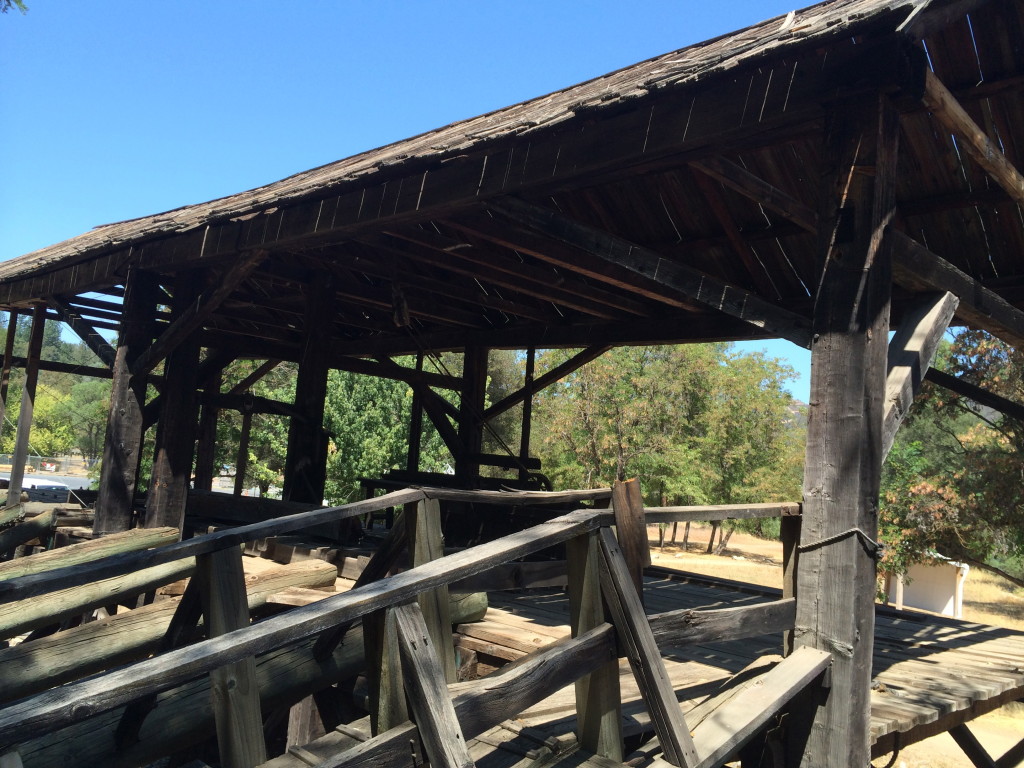 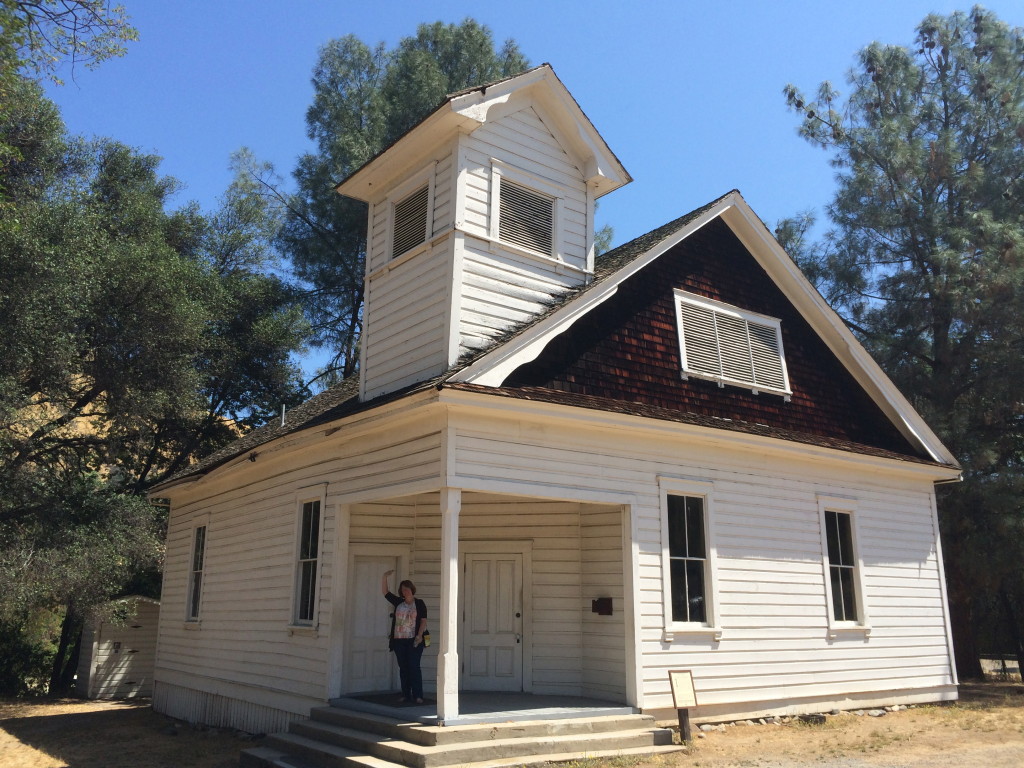 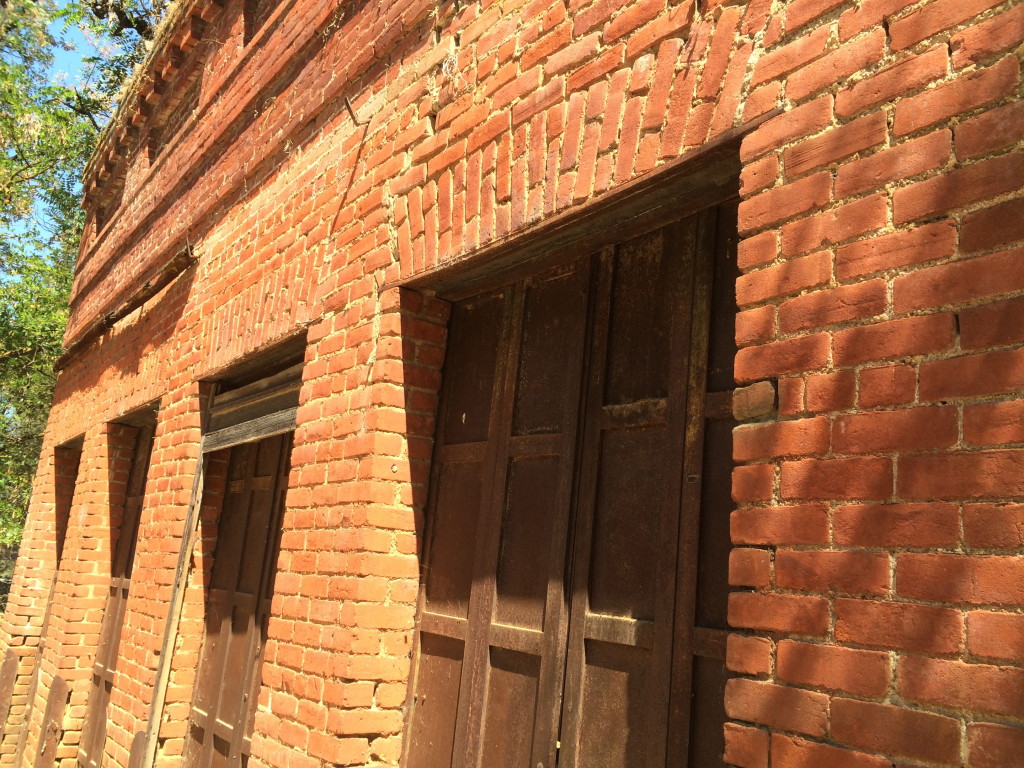 former bank, store and other uses 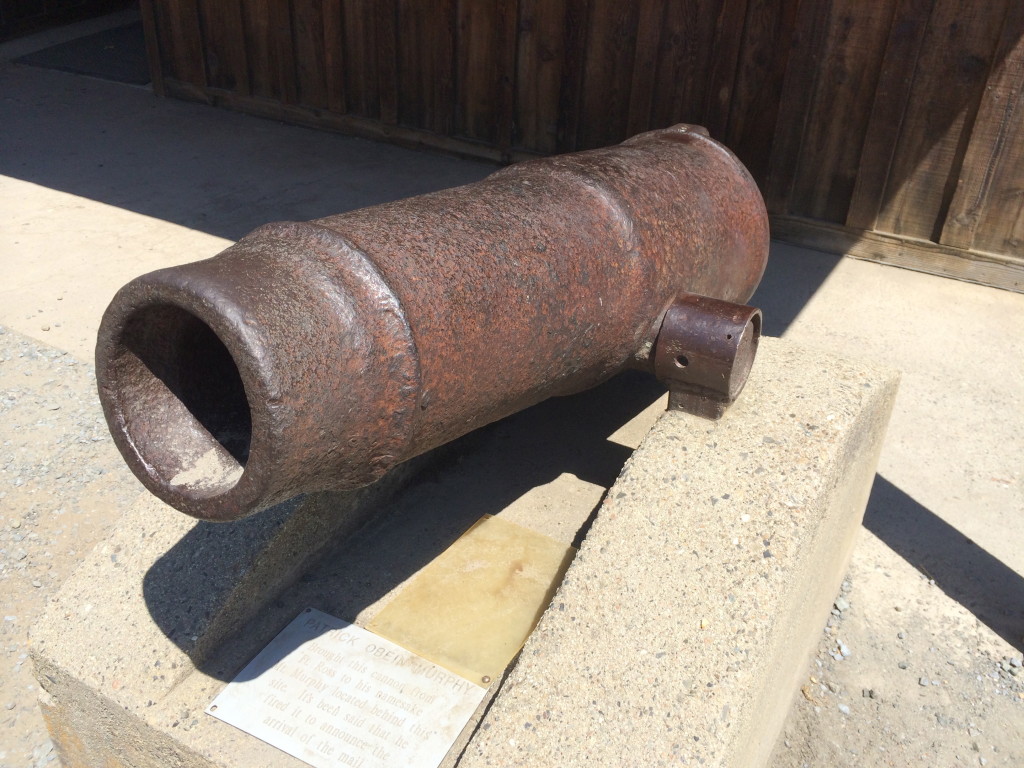 cannon fired to announce the arrival of the mail

We spent the next day touring the Empire Mine State Historical Park. This mine produced $2.5 billion in gold from 1850 to 1956 when it closed. The workers rode into the mine the mine on mine carts in pitch black traveling on an approximate 30 degree incline at 600 feet per minute. They processed the gold imbedded in the rock with mercury, stirred by hand, and arsenic. There are 367 miles of tunnels with a final depth of just shy of one mile deep. Because of the great wealth of the owners and the relatively recent closure, it is a well preserved site with beautiful buildings and much of the equipment and mine works still on site. 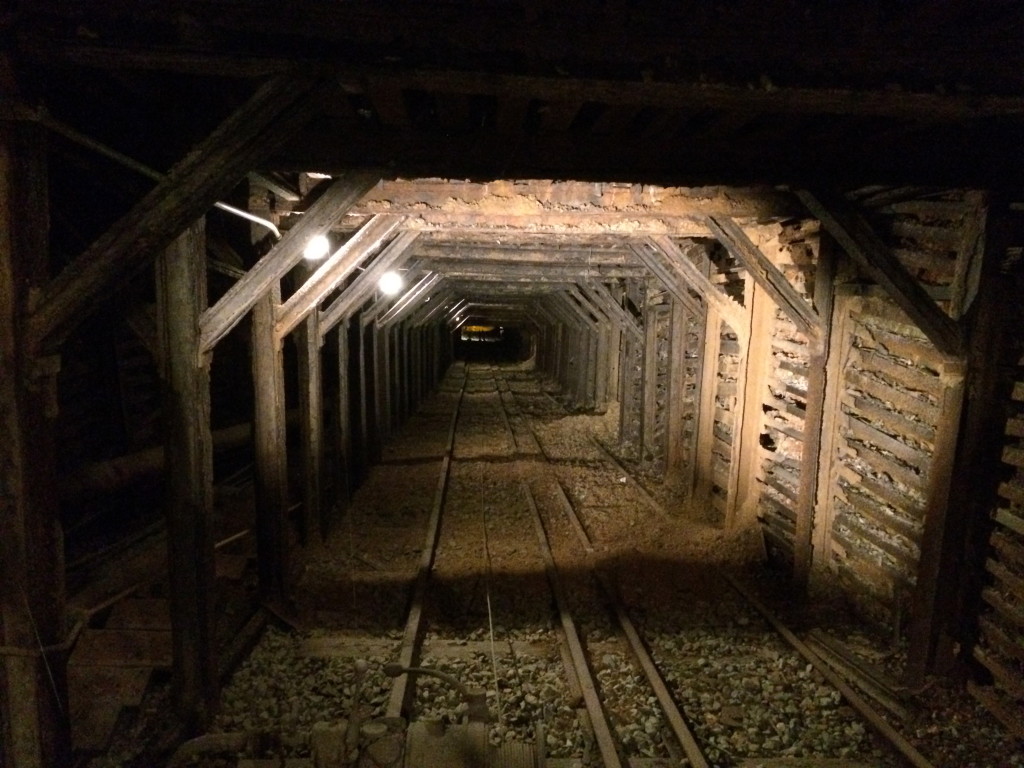 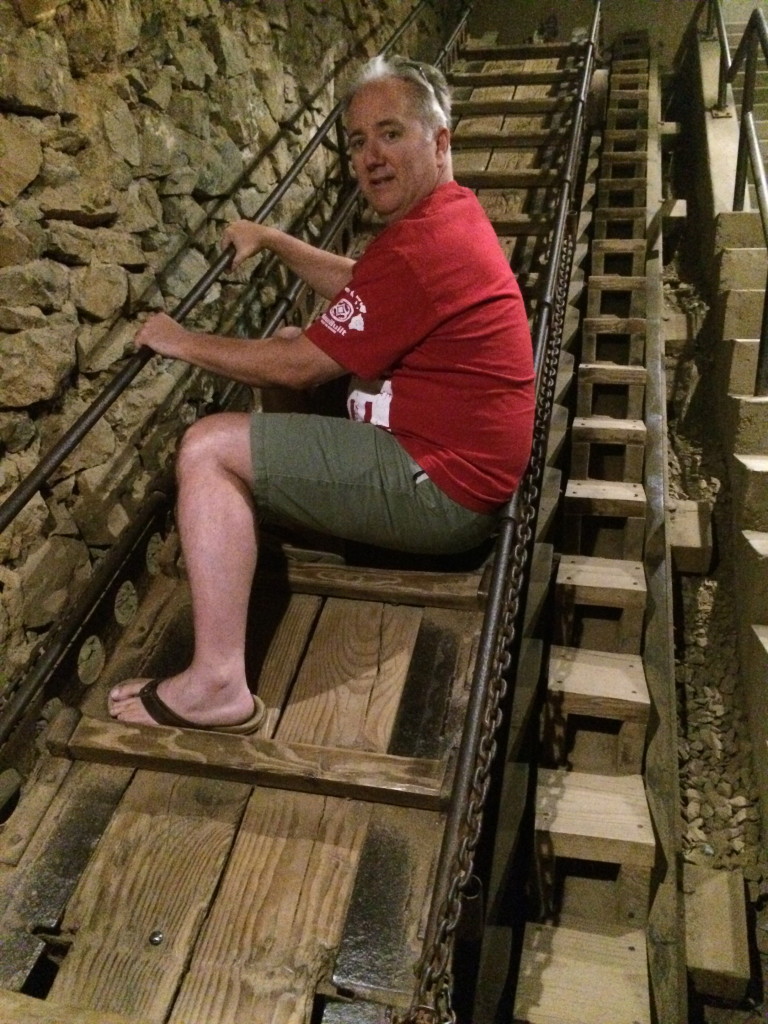 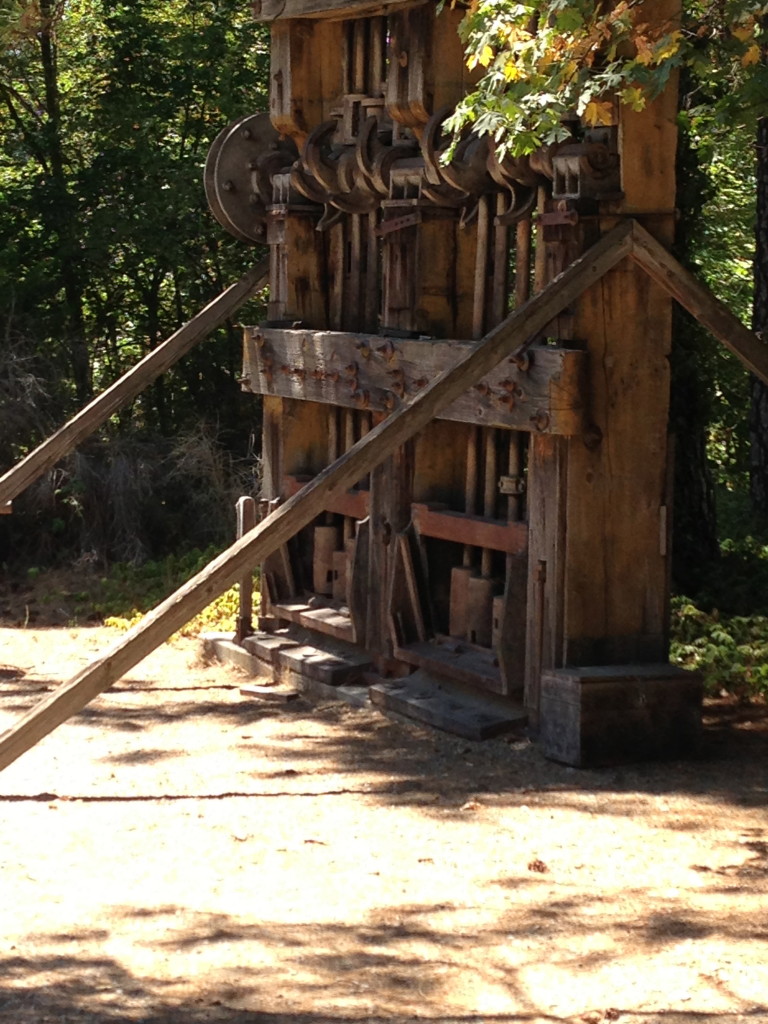 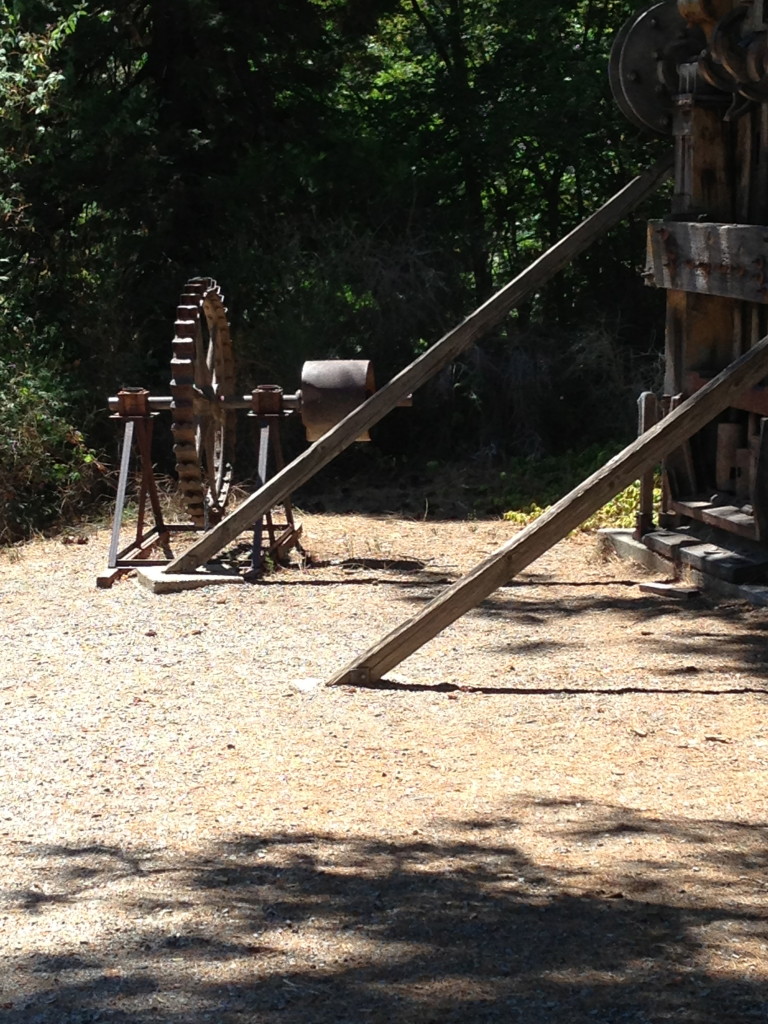 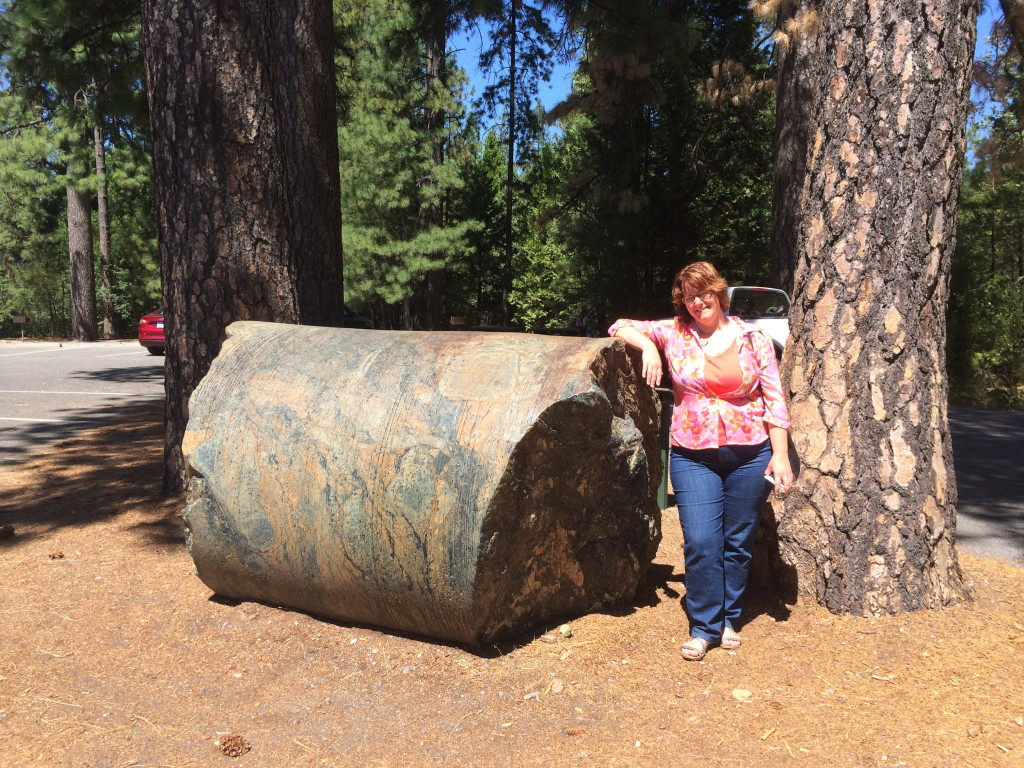 core from boring air holes for the mine 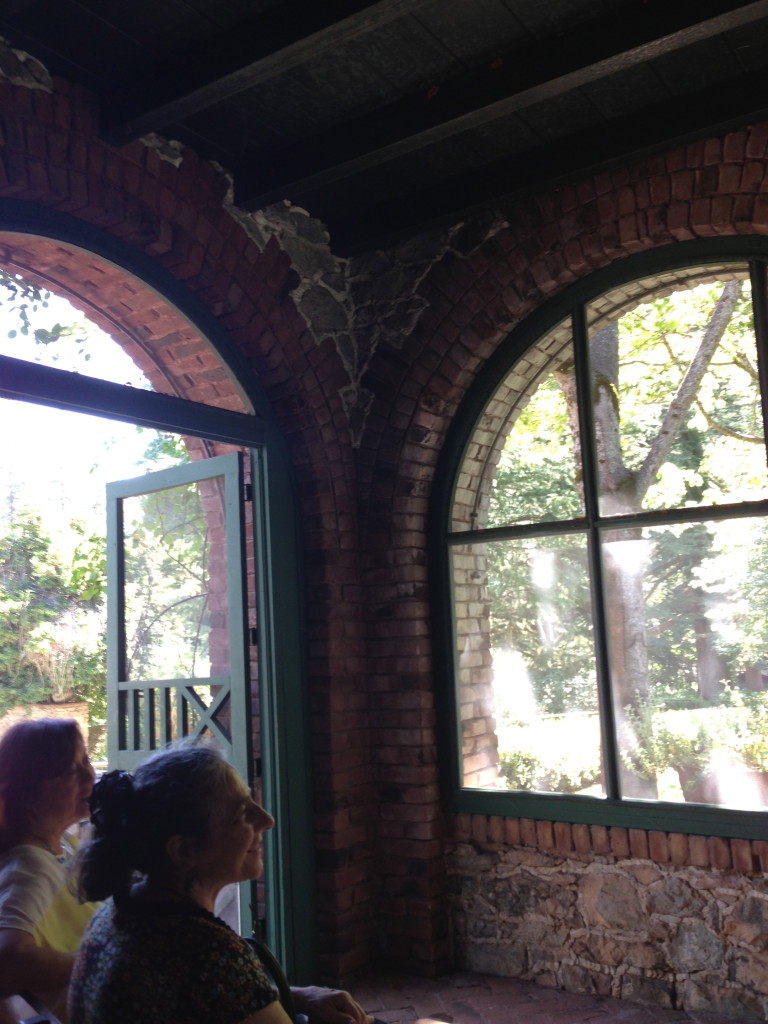 After picking up our camper, we headed deep into the Tahoe National Forest and camped near Sawmill Lake. From there, we traveled east through the forest, stopping at a few overlooks to gaze at the scenery. It was a very nice drive with some amazing views. We headed south through Truckee, Lake Tahoe, Carson City, and finally to Mono Lake. Be sure to click on the panorama shots to see them full screen with all the detail, beautiful country. 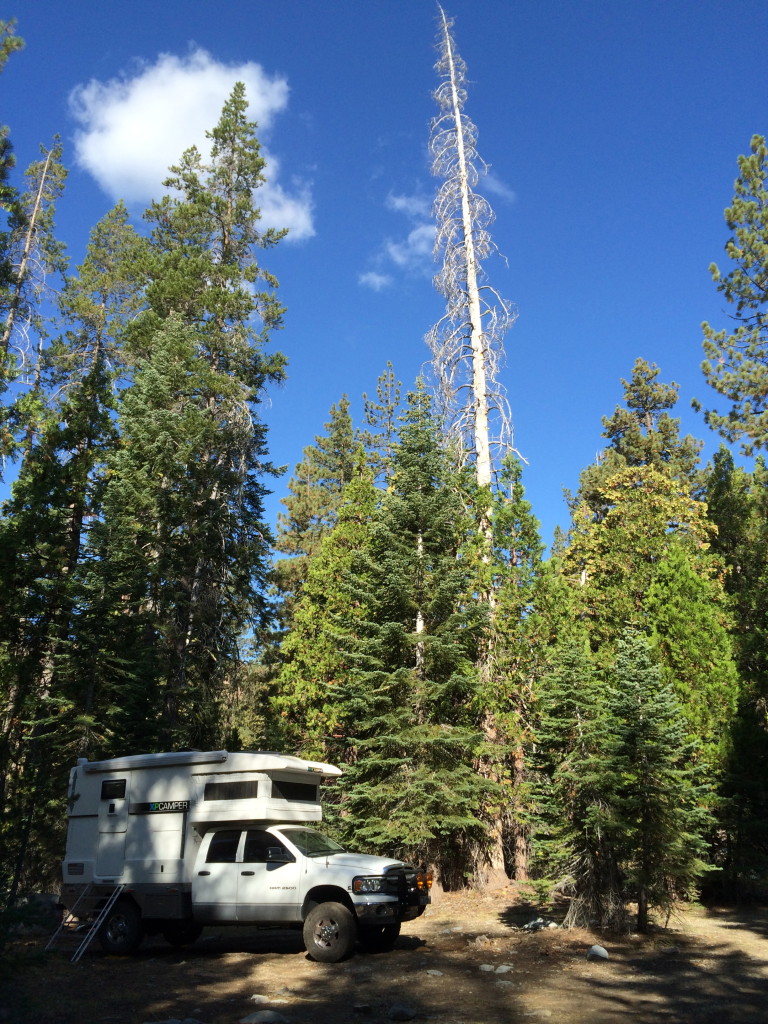 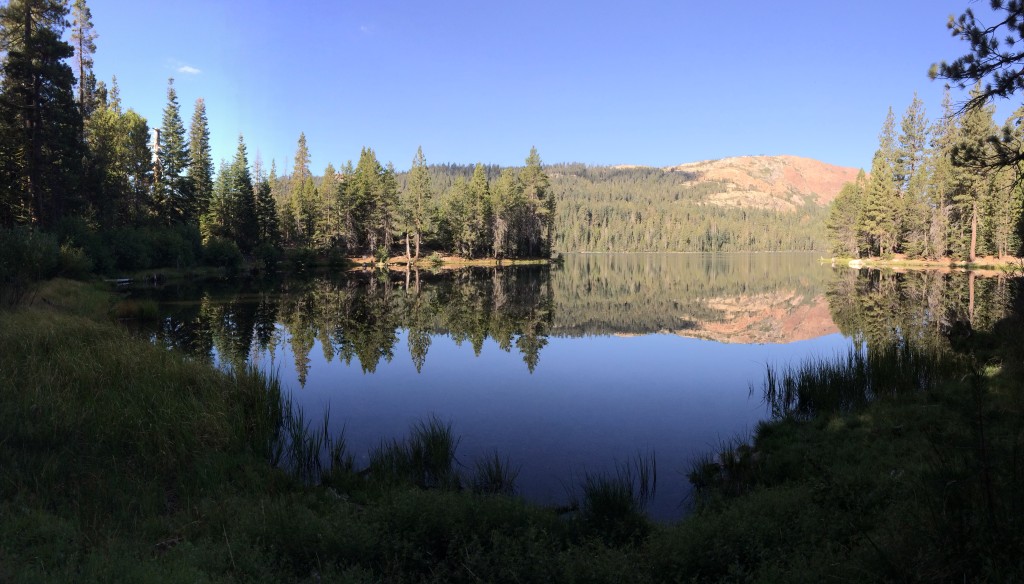 We concluded our long weekend at Mono Lake. After a brief visit to the visitor’s center for a pin and stamp, we were directed to the forest area south of the lake for dispersed camping. On the way we took a walk out to see the tufas up close. These are formed by underwater springs depositing minerals into the saltwater lake. They were exposed when LADWP bought water rights that diverted the lake’s water sources. DWP is now working with the state to reestablish the lake but it is a very slow process. Mono Lake is home to 80% of the sea gull rookeries in California due to the safer habitat for raising chicks. We searched and searched for a campsite with a view of the lake and finally ended up finding a great spot we passed on the way in but hadn’t noticed. All in all, the drive was worth it. We even saw a fat black bear on our way home but couldn’t get a picture of it. 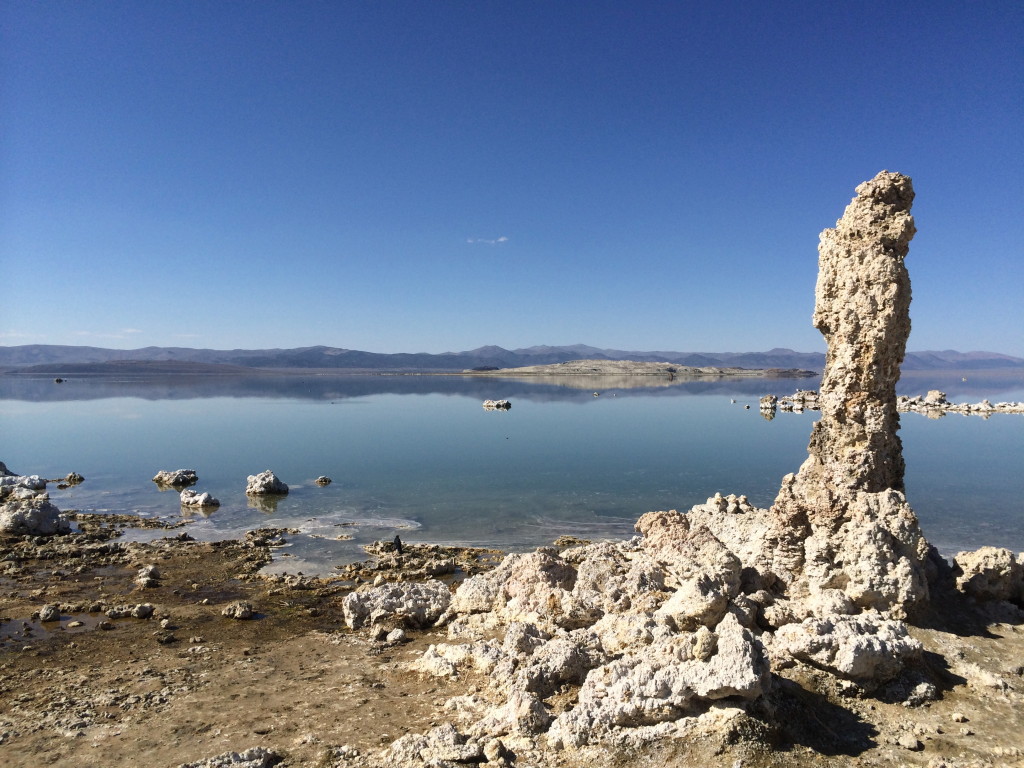 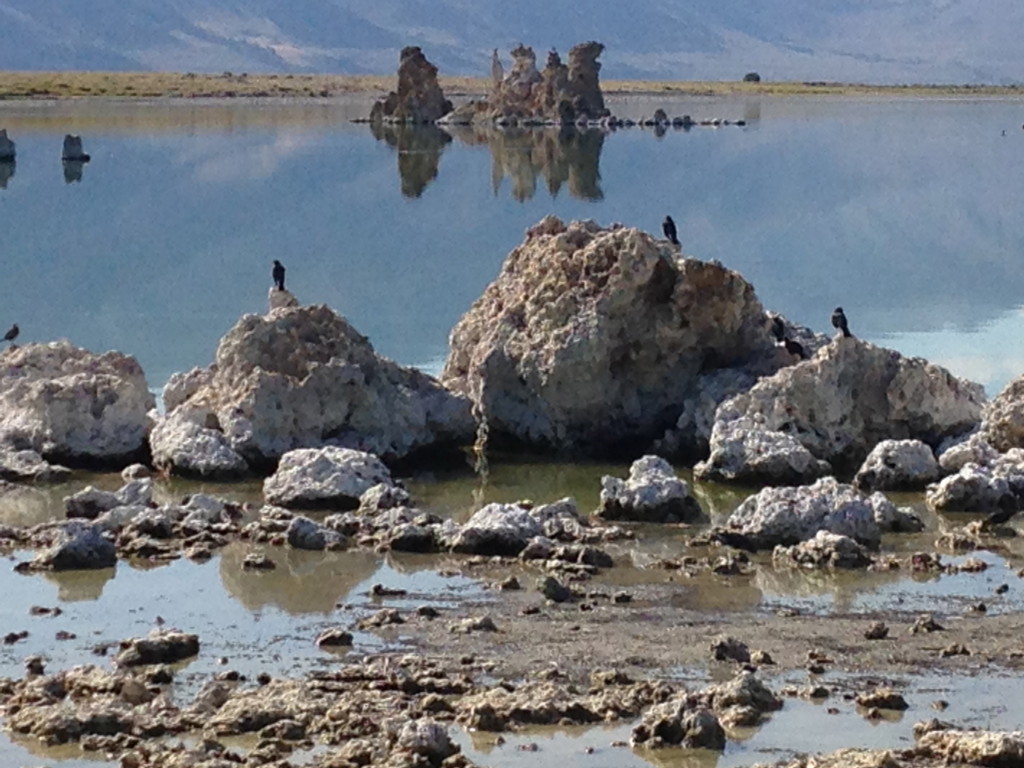 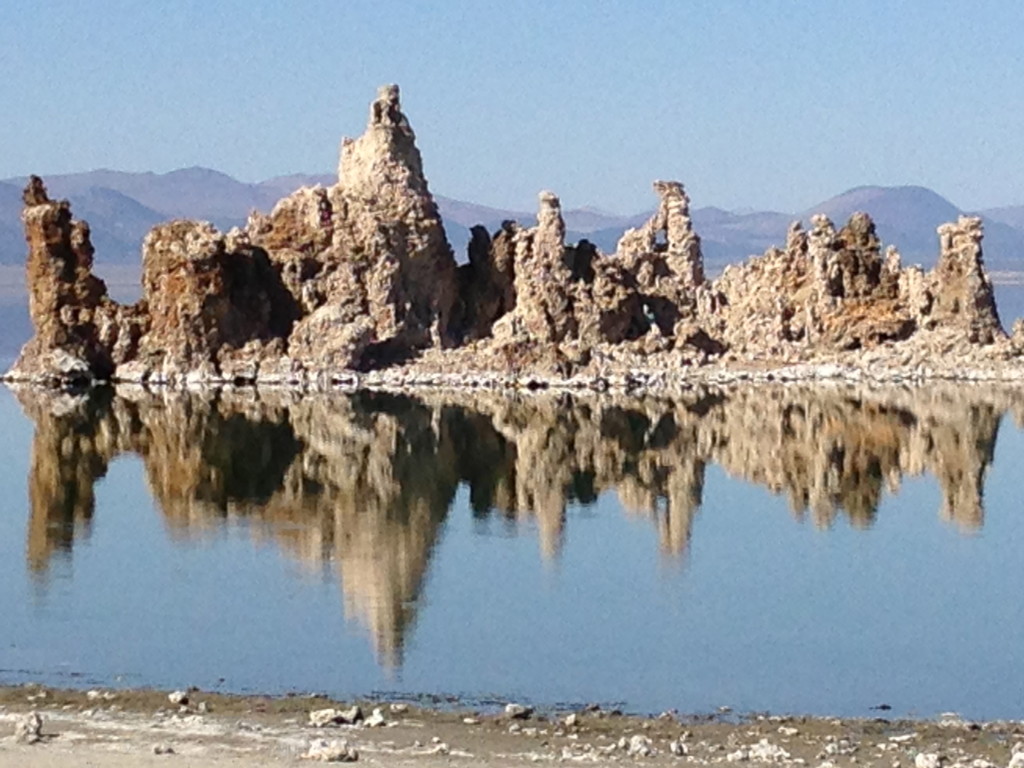 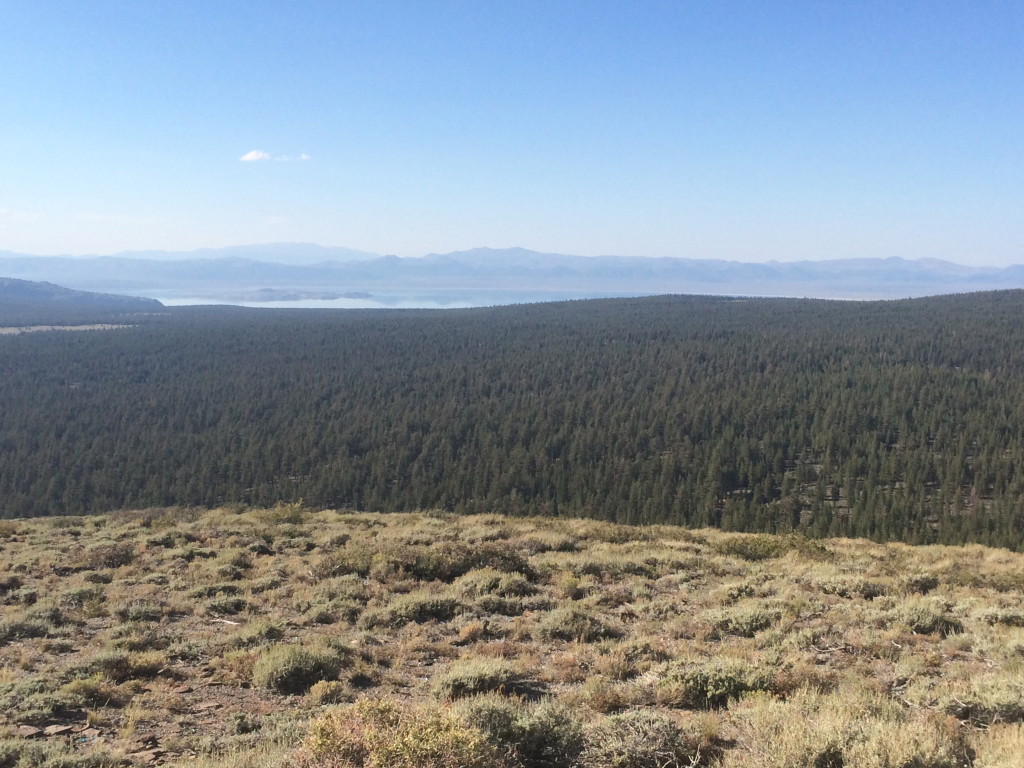 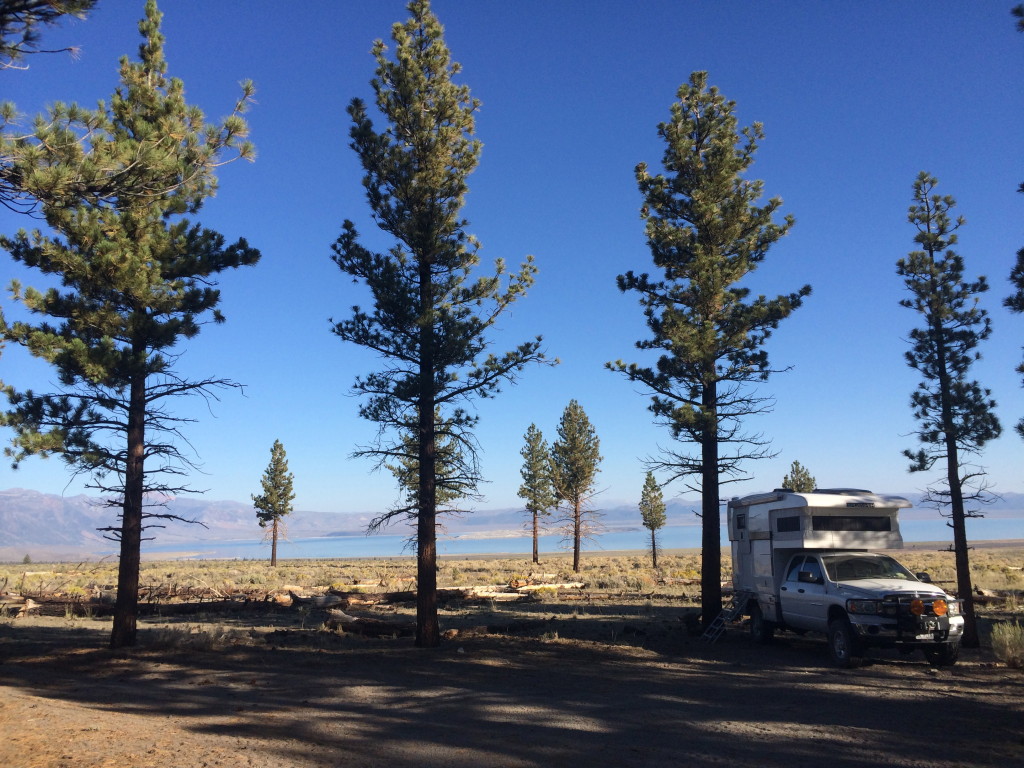 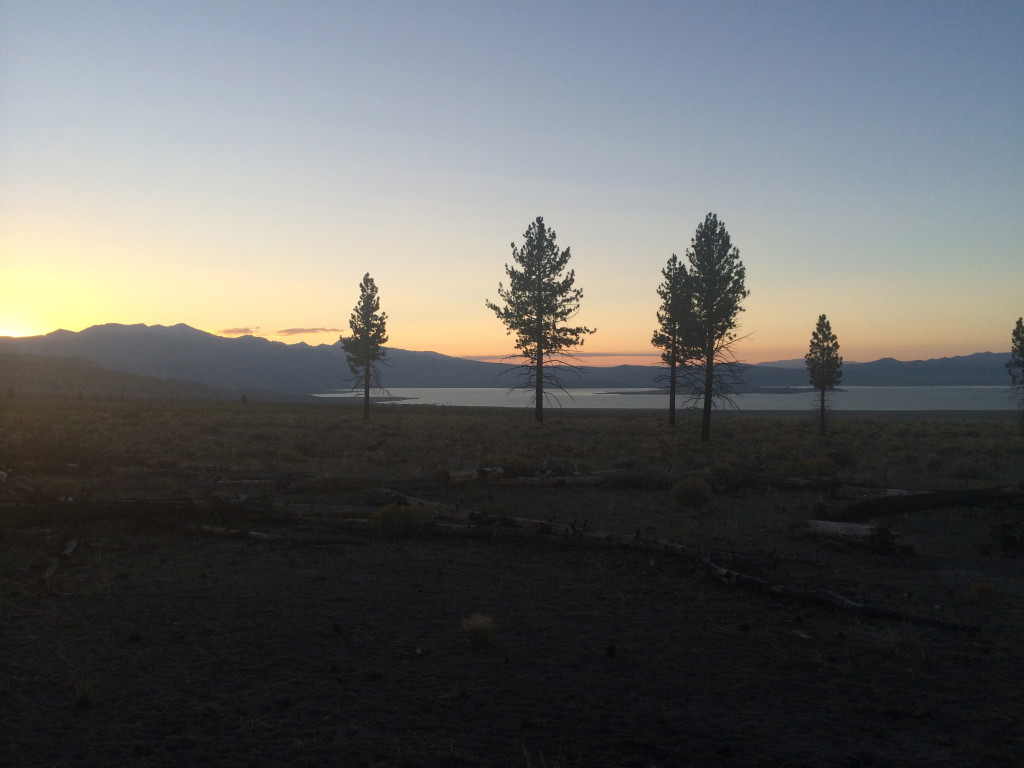 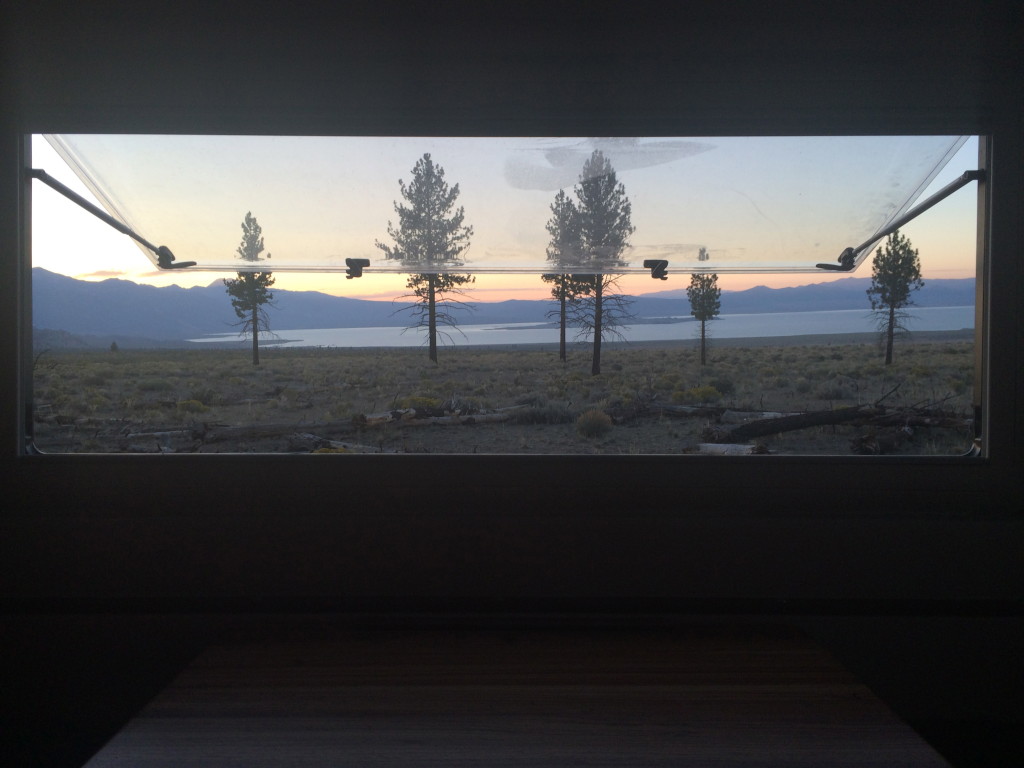